February 2023
Vol. 22, No. 5
An Open Letter to the San Diego Music Community by Yale Strom & Elizabeth SchwartzMarch 2020
Jeff Beck: A Tribute by Ted BurkeMarch 2020
Marcus Petronius Bashore: The Best Seat in the House by T.E. MattoxMarch 2020
Pacific Wave: A Surfin’ Safari March 2020
The Winter Dance Party 1959: The Night the Music Lived by Terry RolandMarch 2020
Back with a Bang! Java Joe's Reunion at San Diego Folk Heritage by J.T. MoringMarch 2020
Book Review: The Philosophy of Modern Song by Bob Dylan by Ted BurkeMarch 2020
Rick Nash: Bass Man in Demand by Wayne RikerMarch 2020
Mod Revivalists the Trebels to Reunite for 40th Anniversary Show by Jim TrageserMarch 2020
If Music Be the Food of Love, Play On: Dually Noted Pairs Fine Food and Fine Music by Paul HomiczMarch 2020
Advertisements 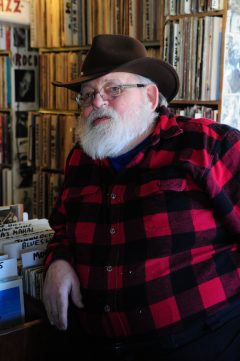 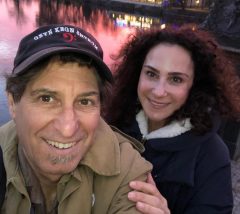 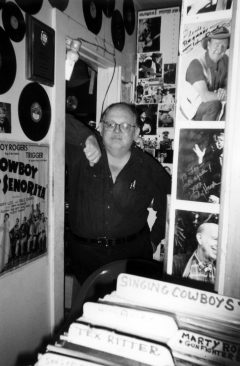 Dear Friends,
We’re making a documentary film about our own Lou Curtiss, called Recordially Yours: The Lou Curtiss Story and we need your help.

Readers of the San Diego Troubadour know Lou Curtiss from his monthly “Recordially, Lou Curtiss” column, which has been running since the first issue was published in October 2001 and has been appearing as reprints from time to time even after his death in July 2018. But there was so much more to him. Lou Curtiss was the creator of the San Diego Folk Festival, an audiophile, folklorist, author, raconteur, radio host, and proprietor of Folk Arts Rare Records. His shop was a mecca for some of the most celebrated American roots musicians, including Jack Tempchin, Tom Brosseau, A.J. Croce, Mojo Nixon, George Winston, Sue Palmer, Alison Brown, Tomcat Courtney, Tom Waits, Gregory Page, Mike Seeger, Sam Hinton, Sam Chatmon, and many others who were profoundly influenced in their careers and lives by Lou.

His influence on the extraordinary musicians who flocked to his shop extends far beyond his corner of the world (today, the shop is located at 3072 El Cajon Blvd. in North Park). There were countless others, some of whom came to Lou directly from the airport, having eagerly traveled to San Diego to soak up his knowledge, stories, and advice and sift through the thousands of vintage and rare vinyl they could only find in one place. The knowledge he imparted to these practitioners has been shared all over the world.

Lou’s story is also the story of the folk music scene in San Diego, beginning in the 1960s. Folk music in America bourgeoned during this period as a cultural outgrowth of the progressive political movement, particularly its coalescing around the Civil Rights movement and opposition to the Vietnam war. As a child, Lou was introduced to both folk music and labor-oriented politics by his father, who was a member of the IWW (International Workers of the World) union and rode the rails during the Great Depression. Lou’s own experiences included registering African-American voters in the deep South and being threatened by the KKK. His social sensibilities, activism, and love of roots music from the South (blues, cajun, bluegrass, etc.) shaped his lifelong dedication to collecting and disseminating American roots music, mirroring the efforts of Jon Cohen and Alan Lomax.

With like-minded colleagues, Lou shepherded the folk music scene in San Diego in places like The Heritage (where Tom Waits worked as doorman and was encouraged and fostered by Lou to play and sing), The End, The Alley, Orango’s, Old Time Café, and Drowsy Maggie’s. In 1967, Lou created the San Diego Folk Festival, the progenitor of the Adams Avenue Roots Festival, on the campus of San Diego State. It was the largest folk festival west of the Mississippi until it ended in 1987.

In addition to interviews and footage of these renowned artists, we have been filming interviews with music and cultural historians, friends, and family. The film will include archival film and sound recordings and will show the broader context of the folk music scene in America and, particularly, San Diego. We enjoyed unique access into Lou’s world before he passed away, including a great deal of film and audio interview footage and archival photos.
This portrait of a legend in the folk music world is made with the loving and gracious support of Lou’s family, community, and the internationally renowned artists who carry his indelible lessons with them wherever they go. San Diegans are rightly proud that the epicenter of so much in the music world is here, in the story of the singularly fascinating, brilliant, and idiosyncratic Lou Curtiss.

It has been and continues to be a labor of love for us. But we can’t continue filming or do post-production on the film without you. We are very grateful to San Diego Folk Heritage (a 501 (c) (3) non-profit organization) for sponsoring the film and enabling tax-deductible contributions. Every amount helps! Please consider going to their website and making your contribution at http://sdfolkheritage.org/film. You can also send a contribution by check (Please put “Curtiss film” in the memo line) to: Treasurer, San Diego Folk Heritage, 12934 Candela Place, San Diego, CA 92130.

Please visit www.yalestrom.com/films to learn about the many other documentary features we’ve made, all of which have been professionally distributed both nationally and internationally. On behalf of the production team for Recordially Yours: The Lou Curtiss Story, we thank you!

Drummer Al Schneider Has More than a Few Stories to Tell! Part 2

Drummer Al Schneider Has More than a Few Stories to Tell!