Things are starting to return to a bit of normalcy, finally. The San Diego Bluegrass Society is restarting its second Tuesday jam session, which will be held November 9 at the Mainstream Bar and Grill, outdoors, in Poway. A fall bluegrass campout is taking place. The California Bluegrass Association (CBA) is putting on an event called the South State 48 on November 5-7 in Carlsbad, at the Carlsbad by the Sea Hotel (with the big windmill). The event is described by CBA as:
The theme of this inaugural festival, and its name, is take from another CBA event, held annually in Bakersfield, called The Great 48. The number refers to 48 hours of jamming during the winter dry spell for bluegrass, held in a safe, welcoming spot where all day and all night jamming is not only allowed, it is encouraged! There is no charge to attend, other than hotel costs for those who choose to stay on site, and everyone is invited whether you come to pick and sing or just hang out and enjoy the music.
SDBS will be there, as will Summergrass and the North San Diego County Bluegrass and Folk Club. Word is that there are lots of safe outdoor jamming spaces. Also expect interesting vendors and other great activities.
IBMA Awards
Every year the International Bluegrass Music Association (IBMA) holds its annual awards show and issues the equivalent of Bluegrass Grammys to outstanding bands, musicians, and professionals in the bluegrass world. Here is a rundown on key winners for 2021 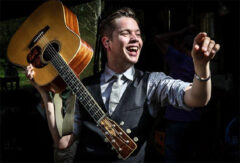 Entertainer of the Year: Billy Strings 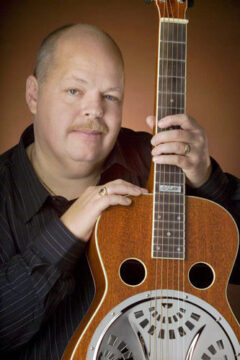 In a bit of sad news, we want to report that outstanding resophonic guitar player Phil Leadbetter has died after a long battle with cancer. In his immuno- compromised position due to cancer treatments, it was Covid that finally took him down. We send our best to his family and friends. Phil played with Dale Ann Bradley, Grasstown, and others over his long career and was named Dobro Player of the Year by IBMA in 2015.