January 2023
Vol. 22, No. 4
Joel Martin’s Pedal Steel Party by Paul HormickDecember 2017
Back with a Bang! Java Joe's Reunion at San Diego Folk Heritage by J.T. MoringDecember 2017
Book Review: The Philosophy of Modern Song by Bob Dylan by Ted BurkeDecember 2017
Rick Nash: Bass Man in Demand by Wayne RikerDecember 2017
If Music Be the Food of Love, Play On: Dually Noted Pairs Fine Food and Fine Music by Paul HomiczDecember 2017
Mod Revivalists the Trebels to Reunite for 40th Anniversary Show by Jim TrageserDecember 2017
Harold in the Land of Jazz by Bart MendozaDecember 2017
Sephardic Dance and Music by Yale StromDecember 2017
Loretta Lynn: A Special Tribute to the Queen of Honky Tonk by Terry Paul RolandDecember 2017
Ben Grace Gilmore: It's All About Building Community by Sandé LollisDecember 2017
Advertisements 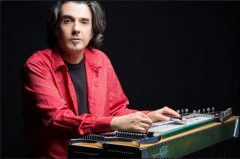 It’s an early afternoon at Nate’s Garden Grill. The aroma of burgers and brats on the grill wafts over the outdoor tables, as the sun peeks through the latticed shade structure, dappling the benches and chairs. It’s Sunday, and some of the folks sit about in their church-going finest.

On stage is a young singer. Barefoot yet wearing a sweater, she resets the capo on her guitar and launches into one of her latest compositions. She has a delightful sweet soprano. To her right seated behind his pedal steel guitar is Joel Martin; this is the latest incarnation of Joel Martin’s Pedal Steel Party.

The first Sunday of each month Martin treks down from his home in Los Angeles to Nate’s Garden Grill, each time with a new singer/songwriter. “Two things for me are great songwriting and great playing,” says Martin. “Those are things that I try to emphasize with the Pedal Steel Party.” It is obviously a haul to make it down to San Diego each month, but Martin says that despite its millions of people and being the epicenter of the entertainment industry, Los Angeles does not quite have a place with the charm and ambiance of Nate’s.

Finding a new singer/songwriter every month is a treat, but another reason to check out Martin’s Pedal Steel Party is because of, well, the pedal steel guitar. And Martin is one of the finest performers dedicated to the instrument in Southern California.
If you’re familiar with the pedal steel guitar, the strains of Buck Owens, Porter Waggoner, and dozens of other country performers clad in rhinestones are what probably come to mind. After all, after = 2 the most famous scientific equation of all time is: = . Well, just as physicists have been trying to go beyond Einstein, Joel Martin is doing his darndest to take the pedal steel beyond the constraints of country music.

He has formed a jazz ensemble, with pedal steel, to play jazz standards. The duo he performs with, Empty Canyons, creates instrumental interpretations of pop hits from the sixties and seventies. His band, Funk for a Better Now is just that, a funk band, once again with Martin playing his pedal steel. He relates that there are times when folks are stymied when he breaks out his instrument at a jazz or funk gig. “Sometimes people don’t know what to do with me,” he says.

His newest project, titled simply Joel Martin, is yet another endeavor to take the pedal steel into new musical territory. “It’s an up jam band, with a great bass player and a great drummer. We incorporate a lot of different stuff, some funk and some fusion,” he says. “We’re performing material from The Band, Sly Stone, Nina Simone, David Bowie, and Peter Gabriel.

“I grew up with Doc Watson and Led Zeppelin,” Martin says, explaining the roots of his catholic tastes in music. “My mom was a guitar player. She played some around the neighborhood and was in a bluegrass band. I remember them playing concerts in the park.” His first instrument was the bass, but the instrument proved to be too unwieldy for his nine-year-old fingers and frame. Guitar came along a couple years later. At that time his guitar heroes were Jimmy Page and Steve Vai. He dropped out of high school to attend the Grove School of Music, the Los Angeles-based school established by the influential jazz pianist, composer, and arranger.
When Martin turned 30 he heard the sound of the pedal steel and was hooked. One musician to really catch his ear was Greg Leisz, the Los Angeles session player known for the work he did on Mathew Sweet’s 100% Fun CD.

Picking up a pedal steel guitar and playing in a country band was not the first thing to present itself to Martin. “That was a real interesting time in my life,” he says. “At the time I was into power pop, bands like Jellyfish.” As the subject of our conversation jumps from Bill Frisell to John Coltrane to XTC, Martin’s voice rises in excitement each time a new favorite musician enters the conversation. His musical journey has been all over the map. “I had been into heavy rock, prog rock, things like King Crimson and Yes. Then I got into jazz and Coltrane. And, after all that, it was then that I got into the Beatles. Once I started playing pedal steel, then I started listening to Mathew Sweet and then I found Neal Young.”

With the pedal steel, Martin started to play and appreciate country music. He admits that his intense love for very disparate music is not shared by everyone. “I have my prog rock friends or friends who are into jazz, and as soon as I talk about Buck Owens their eyes glaze over. It’s the same with people I know who are into country if I bring up something about jazz,” he says.

In our conversation, “difficult” was a word that came up when Martin talked about the music scene in Los Angeles. “There are so many people who are trying to play all kinds of music and make money out of what’s left of the industry. I’ve seen audiences and rooms get smaller,” he says. “ For me, I made three records last year that were supposed to be out now, and I was going to be on tour.”

“Me, I’m about promoting the visibility of the pedal steel. It is potentially a dying instrument. There are very few companies making them. They are not mass-produced, so they wind up being made by hand. People need to hear about it. The instrument needs new heroes,” he says.

So what of this distinctly American instrument? What to make of all those pedals? During the 19th century Europeans introduced the guitar to the Hawaiian Islands, where they wound up tuning it differently and playing the instrument with a metal pipe or bar. Some musicians laid the instrument flat on their laps, which made barring with the metal pipe easier.

About 100 years later, folks like Les Paul, Leo Fender, and a few others were getting the idea of plugging in guitars and making them really loud. They plugged in the Hawaiian guitar and the lap steel guitar was born.

As using a bar across a set of strings limits the chords that are available to a player, manufacturers began making lap steel guitars with multiple necks. Each set of strings on a neck could be tuned differently, allowing the player to play different chords. As a player, this was great. But with as many as four necks to a console, the instruments were heavy and hard to cart around. They could be unwieldy as well. Fender made a four-neck console guitar that used 32 strings. Imagine keeping that thing in tune!

To solve this dilemma, manufacturers started adding pedals (and levers that the guitarist manipulates with his knees) that could change the pitch of a string or several strings. No more four-necked-guitars; the pedal steel guitar was born. “I get asked about my instrument all the time. ‘What is it?’ I get so excited when people ask and I get to tell them about the pedal steel. I feel that I’ve helped the instrument in some way,” says Martin.

Martin likes to educate the public about the pedal steel guitar, but he also feels that by promoting the instrument he can keep it from becoming a museum fixture under the heading “Ancient Instruments.” He says, “I go to pedal steel guitar gatherings and I’ll be the youngest person there. When these older performers pass on, who is going to fill their shoes?”