January 2023
Vol. 22, No. 4
ï»¿Natasha Kozaily Serenes San Diego by Ashley GallagherSeptember 2013
Back with a Bang! Java Joe's Reunion at San Diego Folk Heritage by J.T. MoringSeptember 2013
Book Review: The Philosophy of Modern Song by Bob Dylan by Ted BurkeSeptember 2013
Rick Nash: Bass Man in Demand by Wayne RikerSeptember 2013
Mod Revivalists the Trebels to Reunite for 40th Anniversary Show by Jim TrageserSeptember 2013
If Music Be the Food of Love, Play On: Dually Noted Pairs Fine Food and Fine Music by Paul HomiczSeptember 2013
Harold in the Land of Jazz by Bart MendozaSeptember 2013
Sephardic Dance and Music by Yale StromSeptember 2013
Loretta Lynn: A Special Tribute to the Queen of Honky Tonk by Terry Paul RolandSeptember 2013
Ben Grace Gilmore: It's All About Building Community by Sandé LollisSeptember 2013
Advertisements 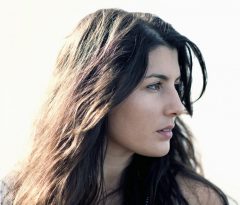 The magic of an island girl’s voice using a blend of middle eastern influence and caribbean sounds is enough to keep anyone salivating. A Cayman Island native, Natasha Kozaily is set to release her next album, Serenading Renegades, in just a few weeks.

Her appearance on the San Diego scene just a few years ago proved her ability to steal an audience’s attention with her sultry vocals and ringing keys. Kozaily’s songs have captured her love for the sea, demonstrated her ability to tell a story about celebration, and even introduced us to the heart of where she grew up and her family’s influence.

But unlike her previous work Serenading Renegades explores a deeper side of her and the world around her. With each number, Kozaily takes a closer look at her own soul’s perspective.

In songs like, “Who We Be,” Kozaily celebrates the diversity of the creative human mind and encourages an element of surprise emphasizing community and the acceptance of the fact that “sometimes we do funny things.” The song is artistry in itself as she relies on high-pitched notes to move through the melody of a catchy chorus, “who we be, we be who, I be me, you be you.” The song creates a sense of self acceptance and her very own colorful personality.

Her recent video release of the song was filmed with her friends on a piece of property known to their circle as the “gypsy house,” a place where they often retreat and be just who they want to be: musicians, artists, and idealists. While the video is shown shot in reverse, the perspective lends to those who might call their artistry backwards, but her rainbow-colored face reminds the audience that different is beautiful.

Kozaily has lived her life with a sense of adventure, love, heartbreak, and deep human connection. In “Magic People” she begs for someone to “pluck my heartstrings until they burst.” Meanwhile, songs like “The Tiniest Elephant in the World” or “A Song About a Tree” show her love for connecting with the environment and people around her, provoking emotional airy dance. Her passion for a life-giving experience shines through various instrumentation, such as classical guitar, tribal drum accents, and deftly played piano tones that will make you want to waltz under the stars.

Her mystical voice gives the listener reason to believe Kozaily means what she sings. There’s no denying she carries a methodical roll in her smooth range, creating a feeling of euphoric draw to sing along and live as colorfully as she does through her music.

Natasha Kozaily will be live September 25th at The Loft on the UCSD Campus to officially release her second CD, Serenading Renegades. Tickets are $10 at the door and I highly recommend you check out her music and give in…to the magic. http://natashakozaily.com

The Transformation of John Lennon

Stacey Murray: Bringing Soul to Mancini, Maroon 5, and Everything in Between