July 2022
Vol. 21, No. 10
Sideman: The Soul Tenor Saxophone of Jonny Viau by Eric LiebermanApril, 2022
The Return of IPO San Diego: After a Five-Year Local Hiatus, David Bash’s Unique Music Festival Makes a Much-Anticipated Return by Scott SamuelsApril, 2022
This Saw Is Not a Tool by Derek ShawApril, 2022
Our Redneck Poet, Merle Haggard by Mark PulliamApril, 2022
Linda Hoover: I Mean to Shine by Jon KanisApril, 2022
Tom Griesgraber: Now a Member of the California Guitar Trio by Paul HomiczApril, 2022
The San Diego International Fringe Festival is Back! by Laura PrebleApril, 2022
Mary Chapin Carpenter: We Remember Moments Not Days by Terry Paul RolandApril, 2022
Judy Henske: A Remembrance by Barry AlfonsoApril, 2022
KIDS THESE DAYS: Christone “Kingfish” Ingram, Eurovision, and the Aftermath of the Y2K Baby Boom by Raul SandelinApril, 2022
Advertisements

Don’t get me wrong, I love John Coltrane! The thing that bothers me, though, is it seems most every tenor sax player who came along, after Trane recorded A Love Supreme in 1965, only wanted to sound like that and paid little or no attention to all the great rhythm and blues sax-men who came before, guys like King Curtis, Jr. Walker, Clifford Scott, Percy France, Hal Singer, Buddy Tate, Maxwell Davis, Bumps Myers, and Willis Jackson. Not too different than what happened with blues guitar players who came along after Stevie Ray. 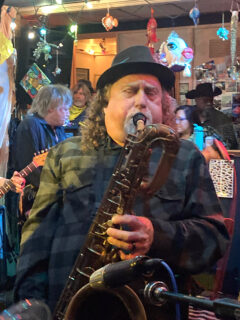 But there’s this cat from Poway, California (he’s fond of saying that he “put the ‘pow’ in Poway”) by the name of Jonny Viau, who over the past 40 years has made a far-reaching reputation for himself as one of the best and most authentic practitioners of 1950s rhythm ‘n’ blues and ’60s soul tenor sax in the world today. And, if you really wanna know why, just listen to his rendition of Bill Doggett’s “Honky Tonk” on Blue Largo’s What a Day record or King Curtis’ “Soul Serenade” on Jonny’s own Sideman record.
I first encountered Jonny playing in the King Biscuit Blues Band in 1981. Around this time I was just discovering blues myself, and I definitely was not an aficionado of blues tenor sax players by any stretch of the imagination. But I had recently fallen head over heels in love with T Bone Walker and as soon as I heard Jonny, his tone, his phrasing, and just his overall musical vibe, I thought that he sounded a lot like Maxwell Davis on my T Bone records. And then I fell in love with Jonny, as well as T Bone! 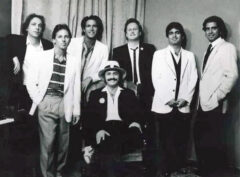 Around six months later I joined King Biscuit myself, and Jonny and I played together in that band for four and a half years, a minimum of three nights a week, 50 weeks out of the year. We took off for two weeks before New Years Eve.
After King Biscuit disbanded in 1986, Jonny played with me in the Rhumboogies, the Juke Stompers, the Blonde Bruce Band, 47 Combo with Nena Anderson, and Blue Largo, all between 1988 and 2018! Hell, we’ve been together longer than most people are married! And after standing next to Jonny on the bandstand for literally thousands of nights, over 34 years, there was never a time when I wasn’t inspired by his deeply soulful playing and beautifully lush sound. As a rhythm guitar player, Jonny always has been one of my favorite soloists on any instrument to back up!
But my musical journey with Jonny is only one facet of his long and illustrious career!
In the late 1980s, Jonny and fellow San Diegan, Troy Jennings, formed what quickly became one of the most sought-after horn sections in the blues world at that time. Jonny was on tenor and Troy played baritone, and together they created—it seems almost supernaturally—just about the biggest, warmest, fullest two-man sax section anyone has ever heard! And it was their own sound! They didn’t sound like anyone else, which could just as easily be said of Jonny’s individual playing. I can recall several times, driving my Riviera and listening to KLON (KJAZ) out of Long Beach, when I knew right away that it was Jonny and Troy on whatever song the DJ was playing, even if I’d never heard it before and maybe didn’t even know who’s record it was! 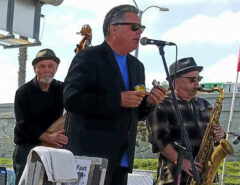 Viau with the Chris Fast Band.

Jonny and Troy pretty much became the house horn section at Pacifica Studios in Los Angeles during the 1990s and can be heard on a multitude of albums by such blues luminaries as William Clarke (Aligator Records), Kirk Fletcher (JSP Records), Roy Gaines, Clarence Holloman and Carol Fran, and Jimmy Morello. Jonny also played on albums by Kid Ramos, James Harman, Rod Piazza, the Forbidden Pigs, Solomon Burke, Billy Watson, the Mississippi Mudsharks, Candye Kane, the Beat Farmers, the Pleasure Barons, and Chris James and Patrick Rynn, a virtual who’s who of the blues world during the 1990s. And, most recently, he can be found on Kim Wilson’s new album Take Me Back, which has been nominated for a 2022 Grammy Award.
Throughout the ’90s and early 2000s Jonny has also toured the US and Europe with such artists as Roy Gaines, Candy Kane, Rod Piazza and the Mighty Flyers, Mitch Woods and the Rocket 88s, and the Blues Beatles (from Brazil.) And when he was back home in San Diego, in addition to his continuous work with my various bands, Jonny was a regular member of Tom Moore’s Five Careless Lovers and Jimmy Woodard’s Swingin’ King’s; he currently plays with both the Tighten Ups and Sue Palmer’s Motel Swing Orchestra. 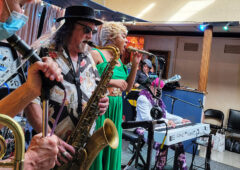 Eric: Man, Jonny, just thinking about that list is mind blowing! I honestly don’t think there are too many other cats alive today who can say they’ve played with even half of those blues and soul legends. It’s really something very special to be proud of and appreciate.
Jonny: Some other highlights for me would be getting to record at Piety Street Studio in New Orleans and Capitol Records in Los Angeles; being on the road with the Pleasure Barons in 1989 and again in 1983, which also included Mojo Nixon, Dave Alvin, John Doe, Rosie Flores, Joey Harris, and Country Dick Montana;
There was also going to Europe with Candye Kane to play for the United by Music organization, dedicated to helping cognitive and developmentally challenged musicians get their talent seen and voices heard; playing the legendary Blues Cruises with Rod Piazza; meeting, talking, or jamming with other musicians from all over the world; playing the Byron Bay Blues Festival in Australia during a massive rain storm, while Kenny Neal and the entire audience sang “Blues Falling Down Like Rain”; the first time I heard myself on the radio when I was 19, which was on a KGB Homegrown submission; and last but not least, being able to say that I’ve played, at least once, with darn near all of the local San Diego blues musicians over the past 40 years!
Eric: What is your philosophy about music? What does it mean to you, and why do you keep doing it in spite of all the ups and downs that such a career brings?
Jonny: I was an only child; my father died when I was eight, and my mother was deaf. Both she and I were pretty quiet by nature, so my verbal communication and conversation skills were less than fully developed and did not come easy to me. But when I started playing instruments, I found that I could express myself much better through music, and that’s something that has remained true for me my entire life. While I’m not always able to get my words to come out the way I intend them to, I can always count on my music to say exactly what I want. And I’d like to think that this also goes the other way, that someone listening to my music feels like I’m speaking to them and that they can understand me. 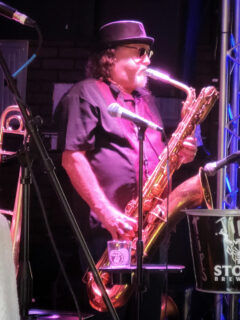 Getting positive feedback, from both colleagues and listeners, is always rewarding and just reinforces the idea that I made the right choice in my life. Of course, I go through the same thing that I think most professional musicians do at various times in their careers, a lack of motivation, a feeling that I’ve sold out when I play music that I don’t really “feel,” or playing with musicians who are not in the same space as me at the time, a yearning for something different without quite knowing exactly what that is. But I learned a long time ago that those negative feelings always pass and things work out the way they are supposed to. And then I remember, once more, that I am so fortunate to make money (or not) at something I love.
Eric: Considering all that you’ve accomplished with your music already, is there anything you haven’t done yet that you still dream of doing?
Jonny: Well, I’ve always wanted to play “Night Train” behind a real stripper, so that’s still on my musical bucket list! But, I’ve had so many great experiences and worked with so many great people, there really isn’t anything else that I yearn for. I just want to keep playing and recording—and hear the phone ring and know that I’m wanted. I hope that the bands can still afford “the parsley on the plate!” I just wanna be loved! Is that so wrong?
Eric: You are loved by so many Jonny, and you should never doubt that. Anything else you want to add before we wrap it up?
Jonny: I just feel so fortunate to have played and recorded with so many talented musicians throughout my career, here at home, across the country, and internationally. And I have learned something from everyone I’ve played with, whether it was something technical or stylistic, maybe something more philosophical or even something about just being a better person. And I’m thankful to each and every one of them.
I have always known that musicians are very caring and supportive of each other, but I’ve personally experienced this in real action recently. Going through the COVID crisis that has affected everyone, and having had some difficult medical and financial challenges of my own these past couple of years, I can tell you that the music community, both the players and the fans, have gone above and beyond in terms of their kindness, support, and generosity. I am proud and so grateful to be a part of that community.
Eric: That’s beautiful, JV! Thanks for doing this!
Jonny: One more thing! When I read your introduction to this interview, I thought it was funny how you mentioned that I used to say that I “put the pow in Poway!”
Eric: Well, just be glad I didn’t say anything about the time in King Biscuit, when you leaned over to me on the bandstand, just as we were about to start playing, and said, “I gave myself a new name, the Barron of Love!”
Jonny: Should we say anything about rubbing the lotion on your back?
Eric: Ah, maybe we should save that for next time!

A Drunkard’s Dream! A Festival to Celebrate Art and Music