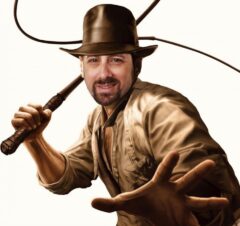 
The second wave of punk emerging in 1980 would spawn bands like the Circle Jerks, Black Flag, and the Misfits, and from that ghoulish outfit would emerge Samhain and Glenn Danzig. The Alice Cooper-influenced, self- and audience-mutilating G.G. Allin, who often defecated onstage and repeatedly promised to kill himself during a show (he eventually perished from an accidental drug overdose), also emerged around this time.
In the late ’70s / early ’80s, the new wave of British heavy metal was unleashed. Bands like Iron Maiden combined some of the by then de rigueur traditions of macabre theatricality with punk’s faster tempos to create new mythological dimensions in shock and awe. Judas Priest and others followed suit with their own combinations of intimidating music and iconography.
This in turn influenced speed metal and thrash in the States, with bands like Metallica, Slayer, Anthrax, and numerous others making aurally punishing contributions.
Alongside thrash and hair metal, and having since earned the nickname “the most dangerous band in the world,” Guns n’ Roses combined the two sounds into a new alloy that catapulted their debut album—1987’s Appetite for Destruction, which originally featured a visually disturbing, highly controversial painting of the same name by artist Robert Williams—into multiplatinum sales (it’s still the greatest-selling debut album of all time) and mammoth tours rife with drunken debauchery and self-sabotaging expressions of Axl Rose’s overblown ego (Rose brought the physical danger directly to the crowd on more than one occasion).
Meanwhile, looking like an adjunct contingent of the murderous, petrol-mongering gang from The Road Warrior in makeup, and with their second, 1983 album having been titled Shout at the Devil, Mötley Crüe frightened everyone with the associated Satanic imagery, onstage theatrics, and offstage exploits. There weren’t too many junior high and high school binders of the time that didn’t have the pentagram and band name logo—complete with umlauts—drawn thereon.
Twisted Sister were a similarly dressed quintet out of New York, but with singer Dee Snyder—who appeared on their Stay Hungry album cover clutching a still viscera-caked animal bone with a horrific facial expression—distinguishing himself by going head to head with the newly formed PMRC (Parents Music Resource Center), the lily-livered collective of overprotective parents (including future second lady Tipper Gore) engaging in dubious censorship with mandated advisory stickers on any new releases that even remotely fit the criteria (the resulting irony being that the stickers often drastically boosted sales of those albums).
Right around the same time, the newly emerging hip hop genre was attracting scads of unnerved acolytes—many of them young, affluent white suburbanites—with a new kind of danger: ghetto reality. Groups like N.W.A. and Ice T’s Body Count were telling it like it is, with autobiographical tales of gangland violence, arrogant misogyny, and drug trade surreptitiousness and collateral damage that would eventually attract the attention of both the PMRC and FBI (the former’s “Fuk Da Police” and the latter’s “Cop Killer” earned significant scrutiny from both agencies).
Public Enemy essentially announced the next chapter of the Black Panther party with albums that openly attacked the Caucasian patriarchy from the inside with confrontational lyrics that were onomatopoetically abetted by a cavalcade of grating noise loops over killer beats and Chuck D.’s and Flavor Flav’s in-your-face delivery.
In the mid-’90s, the suspicious, still unsolved murders of Chris “Biggie Smalls” Wallace and Tupac Shakur brought the dangerously escalated, all-too-real East/West Coast rap feud to a deadly conclusion as the rest of us looked on in dumbfounded horror, wondering who might be next.
Aside from Slipknot, the ’90s saw visually disturbing elements recede in favor of aural ones, with the rise of sonically bludgeoning alternative bands like Helmet, Soundgarden, Tad, Tool, Deftones, and many more. But there was one singular artist who managed to repurpose Alice Cooper’s shock-rock legacy into a grunge-era context.
With his underworldly appearance (stringy long dark hair, single striking contact in one eye, and body-wide pallor), and in collusion with MTV as a then still prominent visual medium for commercial music, Marilyn Manson was probably the first—and last—since Dee Snyder to incite uproar and controversy on such a wide scale. Whether it was being embroiled in Columbine’s aftermath (the two teenage murderers had cited him as an influence, and Manson found himself the sole scapegoat), his publicly announced subscription to Satanism and the hedonistic philosophies of 20th century English occultist Aleister Crowley (also name-checked by the aforementioned Ozzy Osbourne and Jimmy Page), or the latest scandal having come to light surrounding the domestic abuse of ex-wife Evan Rachel Wood, the former Brian Warner continues to make headlines.
**************
By now, Gene Simmons––who was almost prematurely outed as the Israel-born Chaim Witz on the Mike Douglas Show in 1974:

has long been debunked, having begun to lose his edge the moment KISS started to exchange the intimidatingly theatrical hard rock that made them famous for kid-friendly merchandising and comic-book disco in the late ’70s. Dispensing with the makeup and costumes in the ’80s in an attempt to lean solely on their not-quite-up-to-the-task music sealed the band’s nostalgia-act fate and continued the myth-busting process for Simmons. It’s also difficult to sustain a dangerous aura when the man under the now familiar get-up has obviously entered his geriatric years and is currently poised to retire on yet another farewell tour.
Add inuring desensitization to the mix (at this point, thanks in no small part to the internet, we’ve seen it all), the present stranger-than-fiction reality of our daily lives (too many thrills already, thanks), and the drastic decrease in popular prominence of guitar-based rock and concomitant iconography, and it’s no wonder there’s a dearth of current music that could put the fear of untimely death, hell, and damnation into us now. In order to be scared, we must have at least a modicum of innocence left, some gullibility to aid in the suspension of our disbelief, in order to form a foundation for frightening, and we’ve lost it. Perhaps once we come through this current crisis era, somewhere on the other side when everything feels new again, there will be enough cultural quietude and serenity, and thus enough new zeitgeist wall to sully, to gruesomely smear and mar it with fake but still convincing blood.