August 2022
Vol. 21, No. 11
Blues Music Summer Camp for Teenagers by T.E. MattoxJune, 2022
The Lady Doctors Will See You Now by Laura PrebleJune, 2022
Tiki Oasis Celebrates 20 Years of Exotica Mayhem and Fun  by Andy RasmussenJune, 2022
Happy Birthday, Jeannie! Jeannie Cheatham Celebrates her 95th Birthday this Month by Jim TrageserJune, 2022
Zach Caplinger: A Gifted Musician in his Own Right by Dwight WordenJune, 2022
The Return of IPO San Diego: After a Five-Year Local Hiatus, David Bash’s Unique Music Festival Makes a Much-Anticipated Return by Scott SamuelsJune, 2022
This Saw Is Not a Tool by Derek ShawJune, 2022
Our Redneck Poet, Merle Haggard by Mark PulliamJune, 2022
Linda Hoover: I Mean to Shine by Jon KanisJune, 2022
Tom Griesgraber: Now a Member of the California Guitar Trio by Paul HomiczJune, 2022
Advertisements

Blues Lovers United of San Diego announces the return of the Blues Music Summer Camp, which is scheduled for August 8-12. It’s been three years since the last one. That’s three years of listening to the teenager down the street grind out the opening chords of “Smoke on the Water.” Do yourself and the neighborhood a favor and get that kid enrolled in a week-long, blues-immersive day camp to enjoy and take part in five full days of play and performance instruction from some of San Diego’s finest musicians. And the program includes all disciplines: lead guitar, bass, drums, voice, keyboards, and harmonica. The entire week culminates with a live Friday night concert performance. 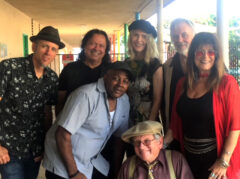 BLUSD is an affiliate of the national Blues Foundation, and San Diego’s current president, Janine Harty, says, Our mission is to preserve and promote blues, especially to the younger generations through our Blues in the Schools program and our Summer Blues Camp. The camp program is specifically designed around young musicians between the ages of 11 and 17 at any and all skill levels. Camp director,Ric Lee says, You just have to have a desire to play the blues. We have teachers like roots and blues veteran Robin Henkel and Grammy award-winning guitarist Fuzzy Rankins. The faculty list continues to grow. Other instructors this summer include Jerry “Hot Rod” DeMink, Karl Dring, Benji Davis, Michele Lundeen, and Mercedes Moore.
The Blues Music Camp has its own blues history both in education and talent. Former BLUSD president Rand De Mattei had fond memories about the early years and says the musicians made it happen. Oh, there were so many! Michele (Lundeen) and Ric (Lee). Missy and Heine Andersen were wonderful; Billy Watson was just terrific with those kids. Scottie Blinn and Jerry “Hot Rod” DeMink were awesome. And a Grammy-winner! Fuzzy was one of the best instructors. He has a rapport with those students that I love. He’s brilliant.

I have been truly honored and blessed to be an integral part of the Camp as a vocal coach since its inception. I do think the kids are fortunate to have an outlet like our Camp to grow and express themselves, and it’s special to watch the friends they make in the process. I’d say my biggest goal is to instill confidence in them to not only project their voices, but their body language as well. It’s not just about standing there singing (or playing an instrument). It’s believing in and telling the story of the song and having an audience believe it, too. It’s a lot to accomplish in one week to have to all the songs come together with all the players, but it’s so amazing and rewarding by the concert finale. —Michele Lundeen

Since Rand was there at the beginning, the question begs what motivated the BITS and Blues camp programs? Rand said, I wanted to save Blues in the Schools…that was my main focus, really—not just save it but turn it into something worthwhile, because I think it is a very worthwhile program. I think we started the first camp about 2007. The goal was to expose the kids to live music. It was a transformational experience for some of the kids to sit in a room and watch the musicians pluck the strings, blow the harp, or hit the drums and not only hear it, but also feel it and see those creating it. Then I met some people from the Alabama Blues Society, and they had a summer camp…and that inspired me. So, it then became an idea of a camp and a performance.

That inspiration continues today, despite the pandemic hiatus. Harty says, The camp is the crown jewel of all of our work. The kids put on a concert after the week-long camp, and they never fail to amaze us with their talent and dedication. We have sent several of our campers to Memphis to participate in youth showcases during International Blues Challenge week. Some of them are returning to the camp as instructors. When it comes to getting kids excited about the blues, we can truly say Mission Accomplished!
That sentiment is expressed through the musical success of some of the program’s graduates. And there have been many; talent like Lelani Kilgore, Wyatt Lowe, Chase Walker and from the Sea Monks’ Noah Kapchinske, who says, When I came to the BLUSD camp for the first time, I was already performing a bit around town, but I didn’t have any experience with improvisation. The camp really pushed me to learn how to come up with an original solo on the spot, which has become one of my favorite things about playing music. When I perform with my band, the Sea Monks, improvisation is a fundamental part of our show. My time at the BLUSD camp gave me the first push to develop these skills, and I feel very lucky to have had the opportunity to learn directly from so many talented and experienced musicians. The BLUSD camp was a big part of my development as a performer and musician.

So, let the kids in that garage band next door know about the return of the Blues Music Summer Camp. It’s open to any musician between the ages of 11 and 17 at all skill levels. Tuition is $300 for the week, and you are advised to register early because enrollment is limited. Need more info or have more questions, contact Camp Director Ric Lee 619-691-1609 or BayouBrothers@Cox.net. You can mail a check or use PayPal (president@blusd.org), mentioning the camp and the name(s) of your camper(s) in the PayPal comment section. The camp will be held at Northminster Presbyterian Church, 4324 Clairemont Mesa Boulevard in San Diego and is sponsored by the Conrad Prebys Foundation. Let’s play some blues!

KIDS THESE DAYS: Christone “Kingfish” Ingram, Eurovision, and the Aftermath of the Y2K Baby Boom