August 2022
Vol. 21, No. 11
Jon Hasz Keeps Music at the Forefront by Charlene PulsonettiJune, 2022
Tiki Oasis Celebrates 20 Years of Exotica Mayhem and Fun  by Andy RasmussenJune, 2022
The Lady Doctors Will See You Now by Laura PrebleJune, 2022
Happy Birthday, Jeannie! Jeannie Cheatham Celebrates her 95th Birthday this Month by Jim TrageserJune, 2022
Zach Caplinger: A Gifted Musician in his Own Right by Dwight WordenJune, 2022
The Return of IPO San Diego: After a Five-Year Local Hiatus, David Bash’s Unique Music Festival Makes a Much-Anticipated Return by Scott SamuelsJune, 2022
This Saw Is Not a Tool by Derek ShawJune, 2022
Our Redneck Poet, Merle Haggard by Mark PulliamJune, 2022
Linda Hoover: I Mean to Shine by Jon KanisJune, 2022
Tom Griesgraber: Now a Member of the California Guitar Trio by Paul HomiczJune, 2022
Advertisements 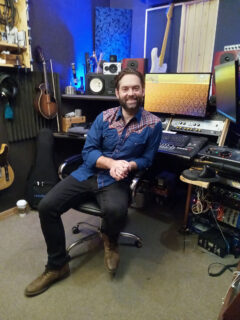 Travel through Ramona and you’re bound to hear a few things: red-tailed hawks calling out across pastures, the clip-clop of horseshoes on pavement, and the hum of cars as locals go about their daily errands. But turn your head in the right direction, and you may hear a few bars of music drift through the air.
Ramona’s live music scene has grown in the last few years, and Jon Hasz, owner of Ramona Music Center, has seen—and been a part of—the progression. Though recent years have offered limited performance options, Hasz has had little trouble keeping busy thanks to several outlets that keep music at the forefront of his life.
“The big thing I do is run our recording studio,” he explains. “It gives me the opportunity to work with a lot of great bands and then either join them, jam with them or help promote them.”
He recently wrote with and produced Mountain View Community Church pastor Jason Winter’s album titled No More Wanderin’ and is collaborating with Heather Nation and Travis Dahl on a new project titled Someday Drivers.
“I play in Heather Nation’s band,” he adds. “She’s an amazing singer out of Encinitas, and she has a good roster of musicians she plays with.” 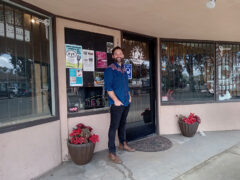 Hasz, in front of his music store. Photo by Charlene Pulsonetti.

Other recent ventures include punk band Squarecrow, a solo progressive rock band called the Za Project, and duo the Beard and the Bird, comprised of Hasz and his wife, Cathryn Curry Hasz.
“I love so many different kinds of music, and any excuse to play and learn new stuff I don’t stop myself,” he says. “I do a little every month and it makes my soul happy. I can’t get too lost in one thing.” Information on Hasz and his current projects can be found at jonhasz.com.
Hasz’s interest in music began when he picked up his grandmother’s guitar in fourth grade, around which time he started taking lessons from a family friend. Though you might associate Ramona with country, Hasz explains that punk has been a major part of the scene for some time. “If you grew up in Ramona, there was a certain amount of rebellion,” he says with a smile.
Aside from the Boys and Girls Club and the skate park in the community at that time, there weren’t too many age-appropriate venues for kids, though charity events, home shows, and a battle of the bands concert held at the high school filled the gap.
“There was a place at the end of town, which is now a mixed martial arts location, that was called The Roadhouse. That’s where I played my first serious show,” he notes. “It was a pool hall and community center-type place and they had bands on the weekends. That was pretty much the only place you could see a band as a family. There are always bands at bars, but being 17, there’s no chance.” 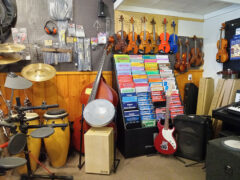 Inside the store. Photo by Charlene Pulsonetti.

Then there was Blue Horse Music, the local music shop. “I would come to hang out with my friends who worked here, and that was my first job in 2003,” he says. It was also where he met Cathryn.
Hasz purchased the business and reopened it as Ramona Music Center in 2007. That led to an even deeper relationship with his community.  Smart use is made of the storefront, with an array of essential instruments and gear to accommodate any budget or experience level. They also keep a few oddities on hand to encourage locals and out-of-towners to visit regularly. To get ahead of big box stores and online retailers, they’ve also built a sizable used instrument inventory.
In the back of the shop is a recording studio, dubbed Afterhours Studio, and multiple instruction rooms.
The shop serves as a point of contact for instructors to pair up with students, who teach on-site, at the instructor’s off-site classroom, or online. Currently, they serve about 200 children and adult students each week. “It’s really nice how universal it is,” says Hasz. “You see that sense of community because, universally, everyone connects to some kind of music.”
Running a brick-and-mortar shop comes with its challenges, but they’ve been able to quickly pivot to keep up in an evolving retail industry.
“We change routes when we need to and change the model a bit every two to three years,” Hasz says. “With Covid, we had to change quickly.” 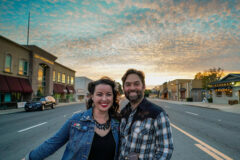 Hasz and his wife, Cathryn. Photo by Tim Connelly.

A new avenue for Hasz is C&G Guitars, of which he serves as the company’s vice president. Dubbed the “one-man-band-guitar” on their website (cgguitars.com) the instruments feature a built-in speaker, drum beats, and Bluetooth capability, making it an appealing option for many. “They’re made by an incredible factory, so the quality is good,” Hasz says. “They’re affordable for beginners but good enough for professional acts. Some people have them on their tour bus.”
Hasz has also been growing the shop’s YouTube channel, where he offers gear reviews, lessons, and more.
Now that venues have reopened, Hasz is fitting gigs back into his busy schedule. He’s also traveling to the East Coast on a regular basis, performing a bit of cross-cultural exchange with musicians in Buffalo, New York.
“(Cathryn and I) were going stir-crazy,” he says. “We picked someplace we had never been, and we had never spent time in the northeast.” There, they discovered a robust music scene. “It’s been a big eye-opener to see how different states work,” he says, explaining that San Diego has a lot of musicians trying to get into a small number of venues, which drives the pay down and the competition up.
“Going out there, it’s the opposite,” he says. “So, the pay is really good, people are super appreciative and there’s a massive festival scene. I’ve never seen anything like it.”
“I’m trying to come back here with some of those ideas to help reform the perspective of what a scene can be,” he adds. “It’s super encouraging to see what they’ve built out there and how its structured.” He’s hoping it can enhance what Ramona had before March 2020, when live performances were becoming available nearly every night of the week.
“We had a Last Friday Concert series at Ramona Mainstage and three or four nights of live music at D’Carlos restaurant, which was free. It was a wonderful scene, and we lost all that,” he says. “We have The Barn now, which is a wonderful venue out here, and way bigger than expected. We can have bigger shows and the owner is passionate about music, so it seems like a good opportunity.”
And with warmer weather on the way, more people will patronize Ramona’s outdoor tasting rooms that have been welcoming musicians for some time.
“Another major part of the music scene here is the Ramona American Graffiti Cruise Nights on Thursdays, which have live music in at least two to three places for about six months,” he shares. “That was a hopeful thing when I saw the town come out and support it. I don’t think I saw something like that growing up. And to see it self-sustaining year after year is a hard thing to do in a small town.”
Hasz is looking forward to building more venue options for kids as well as co-hosting music nights at Smoking Cannon Brewery, located at 780 Main St., with fellow musicians Ashley E. Norton and Michael Dean Goodrich.
“We have to make sure we are building it in a way that keeps growing,” he notes. “Or, at least sustaining itself throughout the year so the people who are taking the risk and doing live music can get the financial and societal benefits of hosting those events weekly or monthly.”

Julian Is Getting a New Town Square! Local Performers Celebrate.