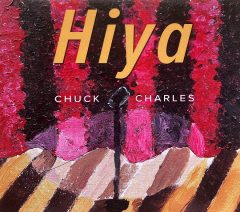 The new album by Chuck Charles is Hiya, and by way of background Charles is Charlie Recksieck, a multi-instrumentalist who has been playing keys and singing for local pop outfits that include the Bigfellas and Leaders in the Clubhouse, as well as composing music for TV and movies. Charles is the vocalist on several releases by these groups, and the quirkiness of the material has been the defining characteristic of releases like 2015’s Won by Leaders in the Clubhouse. The subject matter and instrumentation compare to Ben Folds Five and Steely Dan, glossy keyboard driven with horns and hot guitar solos and floating background harmonies. Maybe yacht rock, but the Bigfellas website calls it “smartass rock.”

The new project is a 15-track with 14 Charles originals, and the subject matter is a smorgasbord of mostly unusual topics (the Bigfellas website, again, has all the lyrics, players, and “story behind the song” blurbs (these are something most projects like this should include.) Charles sings and plays bass, guitars, and keyboards, others prominent include Andy Machin (who coproduced with Recksieck), Kevin Walker, Bobby Dorr, Andrew Zahariak, Spud Davenport, Mike Mannion, Jeff Johnson, and others.

The pristinely played and produced set kicks off with “My TV Friends,” a smooth, midtempo song with jazz-rock DNA about Charles’ fondness for the sitcom and cop shows of weeknight television, as catchy horn charts and guitar fills (by Machin) help it score. Mary Grasso joins Charles for harmony lead vocals on “All Those Pretty Colors,” which cruises along a groove, a tale of consumer culture and how there are 20 brands of the same thing, all with glossy packaging making consumers choose “What I See on TV.”

The quirkiness and eclectic breadth of the project is never clearer than on “Like a Maggie’s Positively Leopard-Skin Homesick Blues,” an eight-minute, 11-verse sendup of Bob Dylan, rattling off one liners about his history from folkie through his Christian phase to a Nobel Prize, delivered in mock-Bobby Z fashion. It is a lyrical feast that deserves repeated listens to absorb all of the cleverness. More of the same on “Independence Day,” which features anthemic horns, and biting satire, drawing an interesting parallel between the King George of the Revolutionary War, then Charles’ own youthful wars for independence in his parents’ home, before landing smartly in recent times, about “King” George W. Bush, who “Couldn’t kill a ghost so he started a war.”

“Ugly Butterfly,” a ballad about the fading of beauty over time, has scorching guitar breaks, featuring Machin and Mannion that soar, and “Lebanese Prison” is a slyly cynical breakup song—his relationship was hell and “Life is not what it was before/ Fear doesn’t scare me anymore.” Relationship issues also populate “Lift” and “The Naked Truth,” which is a reflection on how bad his life is in response to being asked how he is doing. The catharsis pokes barbs at family life; his son and the loss of a relative are sources of frustration. The song features a solid grand piano framework, with nice fade-out electric guitar added by Charles.

A bluesy vibe works on “Oh My,” this time celebrating a successful love relationship, and the slow pace is powered by wonderfully arranged horns as Charles relates “Love is a thing that should never be tough/ It’s totally insane and it’s still kinda nuts.” The hour-long set wraps with “So Long,” a farewell to the son of a girlfriend, who passed tragically from a drug OD. It wistfully mentions the lost future, the unfairness, and the haunting echo of a life taken too soon.

For those who enjoy quirkiness and keyboard driven ballads, Chuck Charles’ Hiya is a generous can’t-miss.