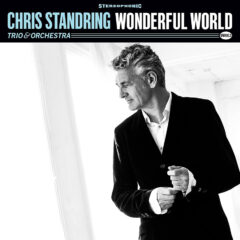 Wonderful World is Los Angeles guitarist Chris Standring’s fourteenth release as a leader. On this disc, the English-born jazz guitarist features a 19-piece orchestra, recorded at Abbey Road Studios in London, under the direction of Geoff Gascoyne to embellish the sound behind Standring’s trio of guitar, bass, and drums, recorded in Studio City, California. The concept of using a full orchestra behind a jazz rhythm section is nothing new as it’s been done in the past by the likes of Wes Montgomery, George Benson, and Charlie Parker. However, Standring’s version is equally effective throughout all 11 tracks with beautifully recorded orchestral ambiance over ten jazz standards and one original tune, “Sunrise,” a mellifluous jazz waltz featuring guest luminaries Randy Brecker on flugelhorn and Harvey Mason on drums.
Standring’s prowess for chord melody agility is deftly featured in the classic jazz standards “Autumn in New York,” “Alfie,” and “Maxine,” in addition to the lone vocal track “What a Wonderful World,” featuring vocalist Kathrin Shorr, along with his smooth sounding octave phrases within his fills and solos, à la Montgomery and Benson.
“Night and Day” is Standring’s best single string soloing moment, swinging through the chord changes with some flashy double-time licks reminiscent of Pat Martino. Another soloing highlight is the popular go-to standard “Green Dolphin Street,” in which he employs a swing rhythm all the way through instead of the usual alternating Latin/swing verses.
One certain highlight is Standring’s arrangement of Richard Rodgers’ “Falling in Love with Love,” a jazz waltz classic, in which he showcases his single note and chordal phrases all in one, as well as the same in the Carlos Jobim classic, “How Insensitive.”
The most intricate orchestral arrangement happens in the closing track, “My Foolish Heart,” written for the 1950 movie of the same title. Standring’s simply stated guitar lines stay nicely out of the way of the darting and weaving orchestral phrases beautifully woven into the fabric of the chord changes, bringing to a close a soothing collection of recognizable melodies you’d want to have handy for a romantic occasion or savor for an easy listening moment.

JT MORING: Only Just a Man

CHICKENBONE SLIM: Serve It to Me Hot