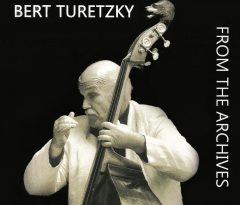 Whether they know it or not, anyone who plays the contrabass who lives in San Diego (and beyond) has been touched in one way or another by the amazing Bert Turetzky, who turned the world of bass performance around with his startling debut album, Recital of New Music, in 1964.

Bert came to San Diego in 1968 to teach at UCSD, and in the intervening years his students have included everyone from bass legends Bob Magnusson and Mark Dresser to his current prodigy: 13-year-old John Murray.

While he was researching and writing his 2014 memoir, A Different View, Turetzky began thinking about organizing a retrospective of some of his favorite recorded material, and thus, From the Archives was born.

The album opens with “Welcome to Contrabass Land,” a light-hearted divertimento collaboration with music by Barney Childs and lyrics by Turetzky. Yes, that’s right. Turetzky has a long-running association with the spoken word and this piece lovingly blends his gruff narration with his trademark mastery of the bow.

Worth the price of admission (and considerably more,) is Arnold Franchetti’s “Septimino,” a 1964 tour-de-force that combines Bert’s bass with his wife Nancy’s flute (she is a virtuoso in her own right) with a turgid and dissonant brass quintet. It sounds like it could have been written yesterday (or tomorrow, for that matter.)
Bert and Nancy also duet on Donald Erb’s “7 Miscellaneous,” another piece written in 1964. Nancy illustrates a startling command of “extended-techniques,” including the use of growls, flutter-tonguing, and multiphonics. Turetzky strikes the bow against the strings with grim violence, yet it is his “conventional” technique that often leaves me breathless. His bow seems to penetrate the corporeal and shoot straight into the cerebral. There is an incredible ebb and flow at work here, which ranges from bliss and quietude to episodes of assault and battery.

Charles Mingus’ “Goodbye Pork Pie Hat” was an experiment with four-track recording, featuring some serious “shredding” by Turetzky. The excitement of the performance is slightly diminished by some (“tape oriented?”) distortion, although that might have been intentional. At any rate, it is an incredible document of the times.

But the masterpiece of this collection is Bertram’s solo rendering of Tom Johnson’s “Failing.” Performed in real time, with no overdubs or studio fixes, Turetzky reads aloud from a humorous and wordy text while he performs increasingly fast and difficult chromatic passages. It is like the ultimate example of left/right brain unity, and it must be heard to be believed.

I wonder if Sir Paul McCartney ever chanced to listen to Turetzky’s four-track version of “Yesterday.” He wanders far afield in this rendition, combining layers of arco, pizzicato, and “world-music” techniques–yet one can always hear the melody.

Turetsky’s From the Archives is available on CD Baby and Amazon.