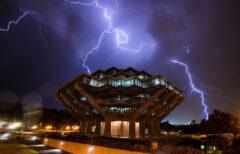 All school-year long, we’ve been celebrating the 50th anniversary of UC San Diego’s iconic Geisel Library building.
Designed by William Pereira, the building is an other-worldly wonder, such that one could very well hear Theremins playing upon approach. Part of the official 50th celebratory Library programming was “Short Tales from the Mothership,” a sci-fi micro fiction gathering, taking inspiration from the space-age design of the venue. 250 words or fewer were solicited: science-fiction, horror, or fantasy. Most of the participating writers knew that the event format was inspired by sci-fi magazine editor George Hay. In the 1970s, Mr. Hay solicited the great science fiction writers of the time to submit a story short enough, such that it could fit on a postcard. Arthur C. Clarke was among the first to reply to Hay. The adjacent campus presence of The Arthur C. Clarke Center for Human Imagination was a fitting encouragement for our recent Library gathering.
It’s a pleasure when the Mothership tales feature ravens as the nesting pairs hidden in our Library’s eaves and are a great source of bliss when they fly out to greet. Many of the stories rely on the neighboring Eucalyptus trees that provide a calming fragrance. Yet, the Brutalist design of the building can still inspire plenty of horror, and the spaceship-chic Library seems to incite a lot of alien activity and time-travel.
We actually host this event about twice per year, and I often bring my favorite MOOG synthesizers to the event and encourage hands-on musical performances from audience volunteers as experimental preludes or postludes to the readings. Being programmed as an official offering of the Library’s 50th Celebration was a delightful surprise for us.
A link is provided here for the May 2021 virtual gathering of authors, including a fun, celebratory 50th Mothership Overture for Harp & Theremin.
https://youtu.be/SejwAfNK3TY
We had originally thought our 50th programming should feature stories only 50 words long, but the standard 250 words is a more enjoyable assignment… Library staff member Jennifer Franson proved 50 is possible, though, and here are two excellent 50-word samples from her:
In Fifty Words or Fewer…
I’ve thought, and thought, and thought, and thought,
And finally have concluded, Scott:
A paltry fifty words will not
Accommodate an awful lot
Of character, or theme, or plot
Or exposition, or what-not–
In fact, the task is rather fraught!
—Jennifer Franson
Copyright 2021.
Another View
Moira scowled. “Spaceship? That library building isn’t a spaceship.
No—it’s an enormous, crouching spider.
Those diagonal beams are the legs, folded under it.
Those mirrored windows are its eyes…”
“Don’t be so morbid!” Kari snapped. “You… Aaaah! What was that?”
The huge concrete limbs shuddered and shifted.
—Jennifer Franson
Copyright 2021.
Finally, dear Troubadour readers, here is the 250-word Mothership Tale I wrote for our first STFTM gathering, some years back…and the story inspired the Harp & Theremin Overture heard in the YouTube link above. Send an e-mail to me at spaulson@ucsd.edu if you want advance warning about the next Short Tales from the Mothership!
SLEEP
by Scott Paulson
Sleep was the treasure that the aliens sought.
A safe, natural sleep.
Not sleep from voltage-induced coma.
Not sleep from synthesized serotonins or harmful hypodermic injections,
nor from hazardous herbal broths described in ancient other-worldly medical texts.
Sleep! An honest sleep period is all they sought.
They heard about a harp therapist on Earth who could tune her strings into a magical modality.
They heard about it via an old earthly AM-radio commercial that they intercepted a century ago:
“Hibernate with Hannah the healing harpist!” “Suitable naptime guaranteed!”
They felt this offer was worth travelling through space and time.
Upon arrival, they were relieved to note that Hannah was blind—greatly relieved,
as their far-from-humanoid appearance had been known to alarm.
They were also relieved that their audio-phone request for an appointment,
spliced together from segments of the old radio commercial,
was pleasing to Hannah’s ear.
As planned, Hannah’s head cold and congested sinuses
were sufficient enough to mask their scent—no cause for suspicion on any and all fronts.
Hannah played for them.
She tuned and de-tuned her harp to find the right personalized mode for hypnotic help.
This was a long, challenging session for Hannah.
She planned to charge double.
And just like the radio ad promised: “Rest assured, sleep will come.”
The aliens slept so deeply that they didn’t hear the arrival of the paramedics.
Hannah was spared the details of the alien nature of the incident.
So far, authorities are allowing the sleep to continue.

Scott Paulson is a monthly columnist for the San Diego Troubadour.  He’s also the silent film curator at the La Jolla Historical Society, a live radio drama host at WsRadio.com’s “Ether Tale Radio Theatre” and an exhibit and events coordinator at the UC San Diego Library.

Paulson is also the University Carillonneur at UCSD, performing commissioned works and fulfilling song requests for the clock chimes atop Geisel Library. As a travelling and performing exhibitor, Scott presents themed shows involving everything from toy pianos to miniature paper theatres to vintage multi-media and electronica-of-interest.
Related Topics:
Up Next